On Monday, 3 June, 2019, our colleague Gustav Kettil presented and defended his thesis for the degree of Doctor of Philosophy “Multiscale methods for simulation of paper making”. 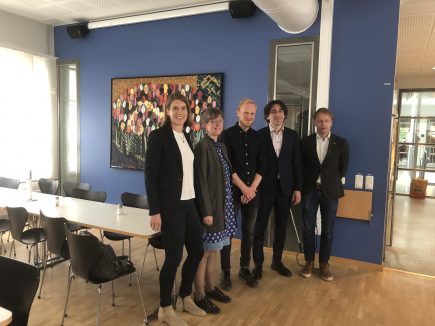 To simulate paper forming, a novel fiber-fiber interaction method is proposed. The method is developed to handle contact forces active on scales down to tens of nanometres. The DLVO theory, based on van der Waals and electrostatic forces, governs the fiber-fiber interaction together with a repulsion force developed to assure numerical stability for fiber motion resolved with discrete time stepping. The interaction method is incorporated as one of four sub-models in a fiber suspension model. The other three sub-models are a fluid model governed by Navier-Stokes equations, a fiber model governed by beam theory, and a fluid-fiber and fiber-fluid interaction model based on an immersed boundary method and experimental drag force expressions. The fiber suspension model is used to simulate fiber lay downs onto an industrial forming fabric.  The resulting virtual fiber sheets are investigated by simulation of the air flow through the sheets. The simulated permeabilities agree well with experimental data for sheets with low density. The proposed framework is able to create three-dimensional fiber networks which can be used for investigation of  mechanical or penetration properties of the sheets.

The flow conditions during the initial state of paper forming is studied by  simulating  the flow over cylinder configurations and three industrial forming fabrics. The impact from the structures on the upstream flow is analysed. Novel impact measures are defined to improve the characterization of forming fabrics and their impact on the flow.

For simulation of the mechanical properties of paper sheets, a numerical multiscale method for discrete network models is developed. A fiber network model is proposed, representing fibers and bonds as edges and nodes.  In the  numerical multiscale method, the fiber network is approximated by a coarse grid, which together with bilinear basis functions defines a low-dimensional coarse space. The coarse space is modified by solving sub-local problems resulting in corrections of the bilinear basis functions. The resulting corrected basis spans a low-dimensional multiscale space with good approximation properties for unstructured heterogeneous networks with highly varying properties.

Numerical examples show that the proposed method has optimal order convergence rates for such complex networks.

We congratulate Gustav and look forward to keep working with him here at FCC!