On Friday, 4 June 2021, our colleague Jacob Leander presented and defended his thesis for the degree of Doctor of Philosophy “Mixed Effects Modeling of Deterministic and Stochastic Dynamical Systems – Methods and Applications in Drug Development”.

Mathematical models based on ordinary differential equations (ODEs) are commonly used for describing the evolution of a system over time. In drug development, pharmacokinetic (PK) and pharmacodynamic (PD) models are used to characterize the exposure and effect of drugs. When developing mathematical models, an important step is to infer model parameters from experimental data. This can be a challenging problem, and the methods used need to be efficient and robust for the modeling to be successful. This thesis presents the development of a set of novel methods for mathematical modeling of dynamical systems and their application to PK-PD modeling in drug development.

The combination of parameter variability and SDEs are investigated, allowing for an additional source of variability compared to the standard nonlinear mixed effects (NLME) model. For NLME models with dynamics described using either ODEs or SDEs, a novel parameter estimation algorithm is presented. The method is a gradient-based optimization method where the exact gradient of the likelihood function is calculated using sensitivity equations, which is shown to give a substantial improvement in computational speed compared to existing methods. The methods developed have been integrated into NLMEModeling, a freely available software package for mixed effects modeling in Wolfram Mathematica. The package allows for general model specifications and offers a user-friendly environment for NLME modeling of dynamical systems.

The SDE-NLME framework is used in two applied modeling problems in drug development. First, a previously published PK model of nicotinic acid is extended to incorporate SDEs. By extending the ODE model to an SDE model, it is shown that an additional source of variability can be quantified. Second, the SDE-NLME framework is applied in a model-based analysis of peak expiratory flow (PEF) diary data from two Phase III studies in asthma. The established PEF model can describe several aspects of the PEF dynamics, including long-term fluctuations. The association to exacerbation risk is investigated using a repeated time-to-event model, and several characteristics of the PEF dynamics are shown to be associated with exacerbation risk.

The research presented in this doctoral thesis demonstrates the development of a set of methods and applications of mathematical modeling of dynamical systems. In this work, the methods were primarily applied in the field of PK-PD modeling, but are also applicable in other scientific fields. 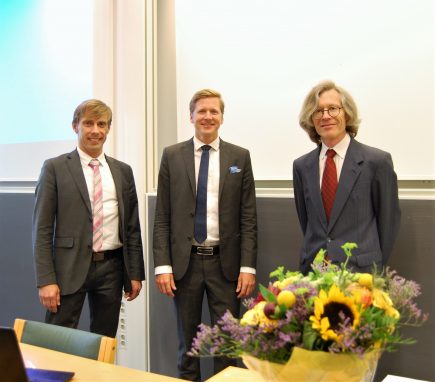 We congratulate Jacob and wish him good luck on his future endeavours.