On Friday, 26 March 2021, our colleague Tomas Hermansson presented and defended his thesis for the degree of Doctor of Philosophy “Computational Methods for Design, Planning and Verification regarding Deformable 1D Objects”.

The industry of today is focused on using virtual tools in the realization of new products. As late changes in a design and planning concept can be extremely costly, there are many benefits to discovering and addressing problems as early as possible: fewer iterations between the different product realization phases and shorter lead-times, reduced numbers of physical prototypes and test series, fewer on-line adjustments in the production system and, in the end, a product of a higher quality.

A topic of special interest is design, planning and verification regarding deformable 1D objects, such as electrical cables, wiring harnesses, hoses, pipes and tubes. These objects are geometrically characterized as one-dimensional (1D) in the sense that one dimension is significantly larger than the other two. Therefore, they usually exhibit large deformations when subject to external forces and moments, which may cause quality problems and unexpected geometrical interference between objects both in production and during the life-span of a product. Hence, it is of great industrial impact if problems with deformation can be addressed early in the virtual product realization process.

This thesis presents five computational methods for design, planning and verification regarding deformable 1D objects. The first two methods are targeted at routing design, i.e. finding a reference design and a routed configuration: one method for objects such as cables that may be significantly deformed due to gravity in their routed configurations and another method for preformed hoses that are not significantly deformed. The third method is in fact a methodology for performing variation analysis that in particular includes a method for generating tolerance envelopes. The fourth method is aimed at assembly verification, whereas the fifth method is aimed at production planning by performing path optimization for an industrial robot with a deformable dress pack. In summary, the methods allow for automatically finding a routed design, verifying the routed design with respect to both geometrical variation and assembly and improving operations in production with respect to deformation.

The main research challenge in developing the methods is to combine simulation of deformable 1D objects with iterative algorithms for path planning, variation simulation and optimization. For this purpose, a discrete Cosserat rod model is used to enable efficient and accurate computations of large deformations. 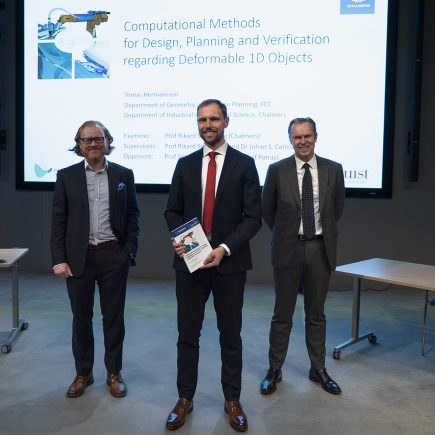 We congratulate Tomas and look forward to keep working with him here at FCC!