On Monday, 20 September 2021, Julia Larsson presented and discussed her thesis for the degree of Licentiate of Engineering “Mixed Effects Modelling and Optimal Design of TNFα Response in LPS Challenge Studies – Methods and Applications in Drug Discovery”.

”Endotoxin and mycoplasma are Nature’s darkest secrets. If they are ever solved, Hell itself will open.” – Lewis Thomas

Endotoxin, or lipopolysaccharides (LPS), are heterogeneous components from the cell wall of Gram-Negative bacteria and a common challenger in the field of drug discovery. In challenge studies a system is provoked by a challenger, such as LPS, which is a commonly used design when studying respiratory and immune-mediated diseases. Unfortunately, LPS challenge experiments with the purpose of determining the inhibiting effect of a drug on a biomarker, such as tumour necrosis factor alpha (TNFα), gives complex data from which it is difficult to determine the drug effect. This thesis is based on three papers and focuses on the complexity of TNFα response data from LPS challenge studies and how mathematical tools can simplify the estimation of the pharmacodynamic effect of the drug.

The first paper presents a second-generation TNFα turnover model able to capture TNFα response data from an extensive data set, using the non-linear mixed effects (NLME) modelling framework. The second paper uses the developed second-generation model for improvement of the experimental design in LPS challenge studies, in order to make the TNFα response data from LPS challenge studies as informative as possible. The third and last paper describes a user-friendly software package in Mathematica for estimation and evaluation of NLME models, called NLMEModeling, where the dynamical systems can be described either as ordinary or stochastic differential equations. 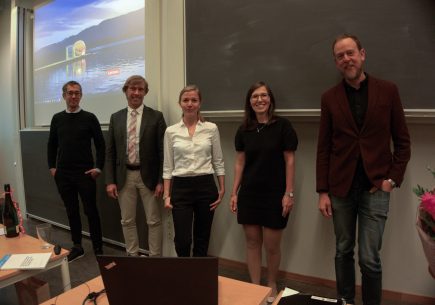 We congratulate Julia and wish her good luck on her future endeavours.