On Thursday, 10 March 2022, Marcus Baaz presented and discussed his thesis for the degree of Licentiate of Engineering “Nonlinear Mixed Effects Modeling of Combination Therapies in Oncology”.

It has been shown that simultaneous administration of two or more anticancer agents can have a beneficial effect on cancer patients. This type of treatment is called combination therapy and is nowadays commonly used in the fight against cancer. New anticancer drugs are constantly being developed and what drugs to proceed with to the next development phase can be challenging.

This thesis introduces the reader to how mathematical modeling can be used to inform such decisions by modeling the relationship between, e.g., drug concentration and in vivo efficacy. Specifically, compartment models based on ordinary differential equations and the nonlinear mixed-effects (NLME) framework are examined.

The second paper is entitled “A Model-Based Approach for Translation in Oncology – From Xenografts to RECIST”. Here the focus is on the translational potential of semi-mechanistic NLME models. Preclinical data is used to calibrate three models, which are then translated using commonly used techniques, and used to predict the result of clinical studies.

The third paper, “Probabilistic Analysis of Tumor Models to Support Early Clinical Trial Design”, details how one can derive probabilistic expressions for the predicted proportion of patients in each RECIST category in a clinical study. These are used to develop a method for predicting the required sample size to show a certain significance level and test power, for newly developed drugs. 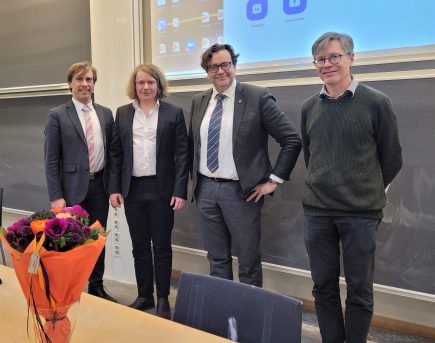 We congratulate Marcus and wish him good luck on his future endeavours.