The revolution is upon us but it’s happening via something surprisingly small; infinitely small in fact. And in spite of their size they are now filling up terabytes of hard drives around the world. With these tiny wonders many concepts which have so far only lived in the minds of researchers and the pages of scientific journals are now entering the industrial world. The digital factory is upon us and the empowering technology is a laser-scanned point cloud. We are entering an era where it is feasible to simulate and optimise entire industrial processes.

Over the last decade laser scanners have ushered in a revolution. It has happened by the hardware and software for laser scanners becoming orders of magnitude cheaper. This has opened up new business opportunities revolving around the scanning and documenting of physical factory facilities. However, the scanning and documentation of industrial complexes is only the first step. The most important part for industry is what comes next; deriving value from their data. This means asking questions of the scanned factory layouts such as, does this new chassis fit along the assembly line? Can we rebuild this manufacturing process? Is there enough space for the new production line? Fundamentally these are simulation questions and it is questions such as these that are driving new and unique simulation tools to derive value from static point clouds and it all began with a piece of cardboard.

Before the advent of laser scanning, the testing of new car models at Volvo Cars was usually done with cardboard silhouettes of chassis. They were moved through an assembly line on a Sunday while nothing was being produced. In spite of this, Volvo Cars almost always had problems with the verification of new car designs. During assembly, almost every new model crashed in the manufacturing line with the result that the chassis became scrap metal, and worst of all, a stop in production since different models are assembled on the same line.

It was around 2009 when Volvo Cars saw that laser scanning had matured to the point of now being affordable and reliable. They required a solution to one of their major bottlenecks in production; the verification of new car designs. We were able to take their point cloud data and develop new tools which could combine both traditional CAD geometry and point cloud models in one simulation tool. This tool allowed Volvo to answer one of their most difficult design questions by being able to guarantee that new designs would pass along their assembly line collision free.

The simulation tools we developed did something not seen before. They allowed users to simulate with their original point clouds containing millions of points. Add to this a complex CAD geometry containing tens or hundreds of thousands of triangles and a complex path. We were then able to simulate the largest, non-colliding volume passing along the path from the start to goal. In addition, other measurements can be added to this such as the minimum distance to surrounding point cloud, etc.

Such tools are general and can be seen as part of a movement towards simulation processes encompassing entire industrial processes. This foray into simulating and modelling an entire factory can be considered part of the new Industrial Internet revolution or as the Germans like to call it, Industrie 4.0. It is worth billions of dollars and is being approached by industrial giants such as GE and Siemens. And of course, the humble point is playing an important role in this new simulation paradigm http://www.computer.org/csdl/mags/cg/2015/02/mcg2015020062-abs.html. 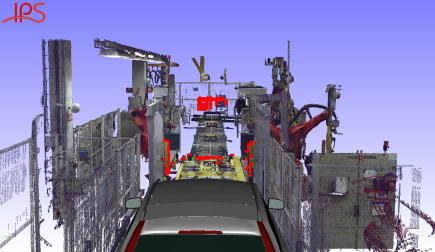